How much does the drone carry?

The answer is 10L, but it may be the wrong question.  A better question is what area can it cover at what water rate.  We use a rapid refill system from a tank on a Polaris™ ATV.  From landing with a depleted spray tank we can be back in the air, all loaded up again in just over a minute.  We plan our spraying so that the drone’s spray tank needs refilling when it is near us.  We fill it from a 100L agitating tank mounted on the Polaris™ which itself is refilled from a 1000L tank mounted on our ute.  So whilst the drone itself carries 10L, the drone spraying system we deploy carries 1110L.

What tasks is the drone best suited to?

Our on-farm experience has shown, that in comparison to other equipment, the drone is a great option for:

How long does its battery last?

Each drone battery lasts about 15 – 20 minutes.  We have plenty of them and the Polaris carries a generator that is continuously recharging drone batteries during the spraying operation.  We ensure we always have a charged battery ready to go when the drone needs a battery change.  Also, the drone constantly reports battery state to the operator, including a number of warning phases as the battery gets low.

Do you fly it manually or does it fly itself?

The DJI AGRAS MG-1S may be considered semi-autonomous.  The operator defines the work area on an electronic map, determines the height to spray from, speed to spray at, type of nozzle being used (with resultant swath width) and required water rate per Ha.  Obstacles are marked off as avoid areas. The radar system (three radar altimeters) is set to passively or aggressively maintain height and the drone is set either to use D-RTK or just its two on-board GPS units.

The drone then makes its computations and requests permission to launch and conduct the task.  By law, the operator must be immediately ready to take manual control of the drone from the flight computer should it be required.

Spot-spraying and similar tasks are primarily conducted by the operator.

How accurate is it?

In GPS only mode, it is very accurate in comparison to itself.  By this we mean its spray runs will be parallel and accurately spaced.  However to make it accurate in comparison to a fixed point on the ground it needs to use D-RTK.  This brings accuracy from about a metre or so to about a centimetre or so.  This high level of accuracy reduces the buffer zones required from things like fences and other obstacles.

What height does the drone spray from?

We like to conduct spraying operations from 1.5m above the target.  This sounds high in comparison to a spray rig at 0.75 to 0.5m but the drone takes advantage of the downdraft produced by its rotor system to accelerate the spray toward the ground.  From 1.5m with 95⁰ even flat fans, we achieve seamless coverage underneath the drone and a tidy 4m swath width overall.

What if it runs out of spray?

We plan not to run out of spray, but refill the drone at a planned ‘pit stop’, where it may also get a battery change.  If we don’t quite get it right, the drone automatically ceases operations, creates a ‘waypoint’ of where it was when it ran out of spray, returns to us for a refill, then heads back to where it left off, and recommences spraying.

What chemicals can it use?

As a professional and approved aerial application system, the DJI AGRAS MG-1S RTK can deploy all APVMA approved chemicals that include approval for aerial distribution.  This includes compliance with all label instructions and restrictions.  It can also achieve the (just released) standards for the distribution of products containing 2,4-D as it is a ‘helicopter’ deploying the product from below 3m.

How much area can it cover?

Our operations conducted so far demonstrate that at 20L/Ha water rates, about 3 Ha can be covered an hour.  At 40L/Ha water rate, it is around 2 Ha an hour.  As the water rate increases, the area covered per hour decreases.  This is reflected in our pricing.  So as you can see, it is not going to do 100 Ha of cotton, in fact, that would take more than a week to complete with the drone, probably best to call an air tractor or at least a ground rig.  But, it can cover a useful area for many agricultural concerns.

The other limiting factor may well be the Delta T of the day and/or other spraying environment conditions.  As a result, for planning, we suggest we can cover 10 Ha a day assuming a chemical that needs appropriate environmental conditions being applied at a water rate of 40L/Ha.

What if there are trees, power poles, fences or other obstacles in the field?

Can the drone spray in the rain?

Our DJI AGRAS MG-1S drones are dust-proof, water-proof (IP43 protection rating, IEC standard 60529).  This means they can fly in light rain without risk which is useful for fertilising operations.  Of course, for pesticide applications we must apply label restrictions on application in or before expected rain.

Can the drone spray at night?

Drone Commander has approval to conduct night flight and spraying operations where the product being sprayed and environmental conditions are suitable.

A daytime field survey is preferred where night operations are to be conducted, and D-RTK will be used.

Is it going to put spray rigs and air tractors out of business?

No.  Air Tractors and Spray Rigs cover very large areas in their normal operations.  The drone is much better suited to smaller areas (1 – 10 Ha), spot spraying (think Lantana or Velvet Tree Pear) and spraying on difficult-to-access terrain (wet ground, waterways, slopes).  There may be some overlap and decisions may need to be made about whether spraying by large aircraft, spray rig, drone or ATV best suits the situation, but the AGRAS is suited to a space in ag spraying that few other options can do very efficiently or effectively.

How is the risk of spray drift managed?

We have spent a lot of money, time and effort to ensure we have a best practice spraying system producing consistent and predictable spray quality.  Outside of specific target situations requiring finer spray quality (orchards etc) we use only TeeJet™ Air Induction nozzles producing Very Course, Extremely Course and Ultra Course droplets.

We also deploy an integrated Kestrel™ Ag Meter that takes environmental conditions every two seconds, linked to an operator alarm system that activates if any limit is approached.  The Kestrel™ even emails these warnings to Drone Commander along with a very detailed report of spraying conditions (readings every 2 sec) at the end of the task.

What nozzles does the drone use?

We use a range of TeeJet™ nozzles, from stream-jets for getting fertiliser into the soil, we like Air Induction nozzles for drift resistance, particularly the even flat fans.  We can also use misting type nozzles for specific tasks and products used in horticulture and orchard-type settings. 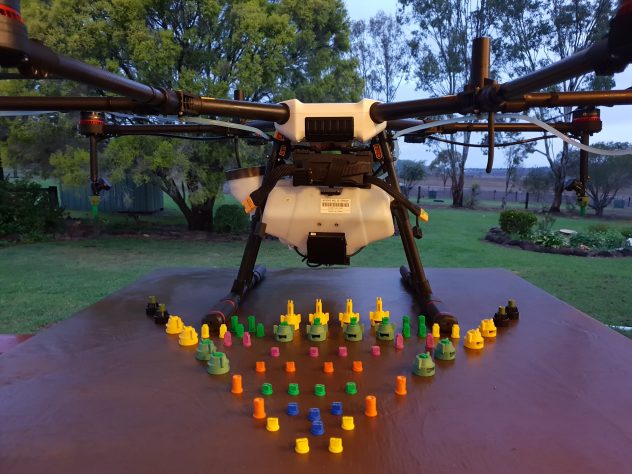 Is there a chemical exposure risk to people?

Ag chemicals are safe if used according to the label and safety data sheet directions.  Our operators are trained, qualified, equipped and approved to handle ag chemicals including using them from the drone.  The good news is, at a time when media attention on ag chemicals is heightened, the drone can boast that it can get its spraying done without the operator or other people needing to be near it… no more turning downwind and feeling that chemical cloud passing over you and your spray equipment.  As a relatively small piece of equipment, flushing and cleaning is also simplified.

Can you use the drone near airports?

Drone Commander remote pilots are licensed and equipped to comply with all air traffic requirements.  We carry ground to air radios, monitor the local air traffic frequency and when required make broadcasts to inform other air users of our operations.  If the operation is near an aerodrome with an active air traffic control tower, our operators will liaise with the airspace authority and co-ordinate the operation with them.

Can the drone spray fireweed with Grazon Extra™?

Yes.  In compliance with the label, it would require two passes at 100L/Ha water rates, effectively making a 200L / Ha water rate task.  This is quite a high water rate for the drone to achieve and each Ha would take 2 to 3 hours to complete.